Petroglyph Fantasies combine images of ancient rock art with patterns which map the solutions to modern mathematical equations. The ancient images, materializing from the past, seem to float through time toward the modern viewer. There is a bittersweet feeling that comes from encountering petroglyphs, from seeing the images so real, so rock solid in front of you, so immediate and just like they were made yesterday, but yet realizing that you will never know any more about the person who made them than is revealed in the pictures themselves. We look in vain for some inscription to work out, some notation to unscramble, some hieroglyphic to decipher that will interpret for us what the makers thoughts and intentions were. If we remain frustrated it is not because the images are too obscure to interpret, but because they were never meant to be verbal communications. Nevertheless, petroglyphs are our opportunity to connect with those people of long ago who, having no technology, left us art. read more Back in the present, our modern science has discovered, by looking at the mathematics of natural processes, that order is present in systems which seem on the surface disorderly, turbulent, even random. Through such investigations, we have learned that there are some systems which must be learned about not by taking them apart (as we would translate an ancient text) but by apprehending them all at once (as we confront a visual image). Perhaps we can learn more from these images by treating them as art rather than as artifacts. Artists must do what scientists dare not; base our work on dreams, fantasy, suppositions and speculations. Combining petroglyphs with these mathematical representations creates an intersection of feelings: of longing, of almost touching some ancient experience that may remain forever out of reach, of being surrounded by the chaos of possibilities; all balanced by the optimistic liveliness of the ancient images which seem to welcome our interest in them. 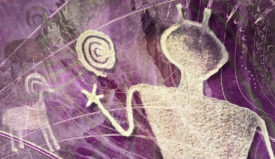 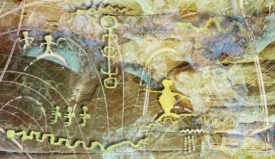 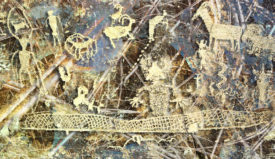 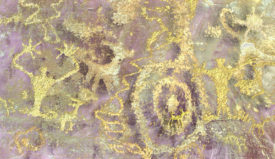 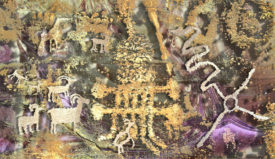 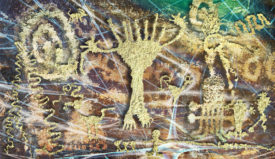 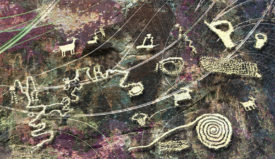